No, I’m not a programmer

It might’ve probably occured to you that your parents always wanted you to become an Architect, a Lawyer or some other fancy job.
Of course the reality would be very different at the end of the day.

In my case, I was always very familiar with technology and design. Having worked on several indie games, CGI advertisements and later on Free Software, Open Source and the Open Web; technology became a passion for me, for which I was lucky to turn it into my job later.

Yet, when people find out that I’m a Mozilla Representative and Board Member at Open Labs hackerspace, they immediately assume I’m a programmer or a developer.
It’s true, I know basic terminal commands in Linux, I have a GitHub account and I know what most programming languages are used for. Yet I’m NOT a programmer. I might be a designer, a hacktivist, an evangelist, a wantrepreneur or maybe an IT; but a programmer is far away from what I am. And I believe that’s okay. 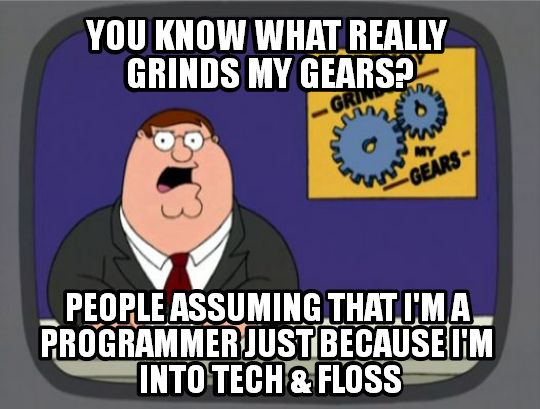 Today, you can be easily involved in tech without the need of referring to yourself as a programmer. Although the tech gender gap and similar diversity issues in tech communities are widely discussed nowadays, latter have become way more inclusive than they used to be. The tech scene is making good progress also in this sense. You don’t have to be a programmer to be involved in tech companies or communuities today, simply because technology blends in our life way more seamlessly than it used to two decades ago.

Having said that, basic programming skills and web literacy are highly suggested and probably will be a must have in the future.
But there is a fundamental difference between calling someone a programmer and that someone having basic knowledge of code and programming logic.

To illustrate, Open Labs has been founded by 5 people, among of them 4 aren’t programmers.
Also, from all active Mozillians all around the world, less than 20% actually contribute to the code of Mozilla’s projects like Firefox. The other part are localizers, evangelists ,community builders, teachers, designers and others. You can see that it takes much more than a few million lines of code to make a project like Mozilla run.
No matter if a programmer or not, passionate people like we have at Open Labs or Mozilla are the catalyst of these organizations.

So please let’s disrupt these cliche’s. Do not doubt people’s passion about a tech project just because they don’t have a developer background (or even tech background).
It’s offensive and prejudgemental.

That’s also the reason I love Free Software and Open Culture. It’s all about the philosophy and social impact of technology, not about how cool or amazing that newest JavaScript Framework is.